I didn't get out for my walk until rather late in the day yesterday, so I took the N-Judah to where I knew there would still be some decent light—the Sunset District. Specifically, Grandview Park at Golden Gate Heights. I got off the train at 16th Avenue, then took the beautifully mosaic'd Hidden Garden Steps* from Kirkham Street to Lawton Street, and I really felt the thirty extra pounds I carry. And, of course, there was more elevation to climb. It's at least a little gradual from that point to where 15th Avenue picks up again and winds up and around the west-side base of the park. I paused at Aloha and Lomita Avenues to record the warm sunlight skimming the houses on both forks of the divergence and the western face of Grandview in the near distance. 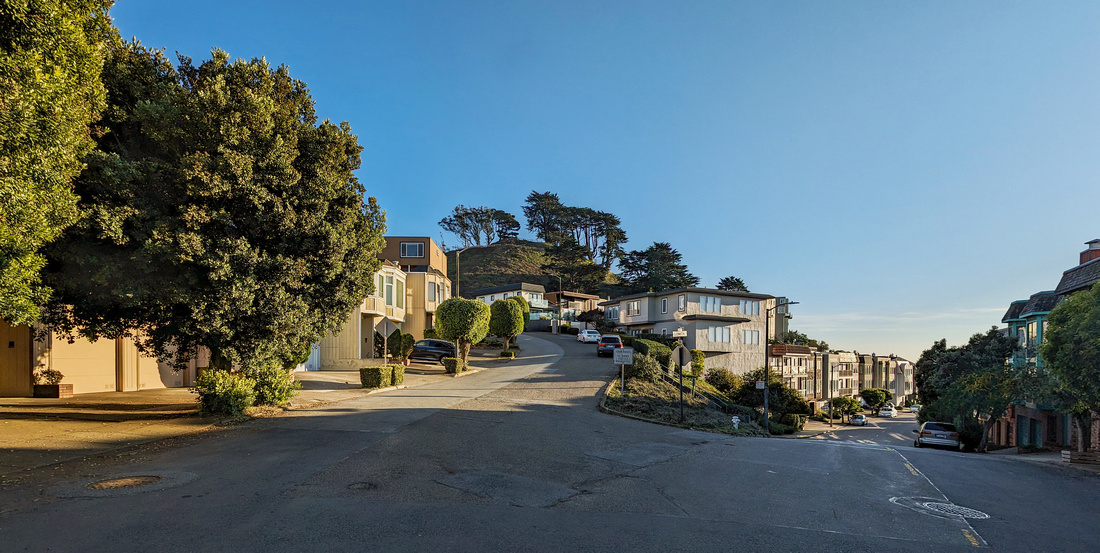 Up Lomita I trudged (at 67, walking uphill = trudging!), and while I have tended in the past to take the steps that lead up from 14th Avenue, which is on the east side of the hill, I opted for the sunlit west-side route, 15th Avenue. There, I thought I'd use the PhotoSphere mode of my Google Pixel 6a (which is designed to create 360-degree images I discovered just a day or so ago) to do an in-camera panorama of the hill I had left to climb. 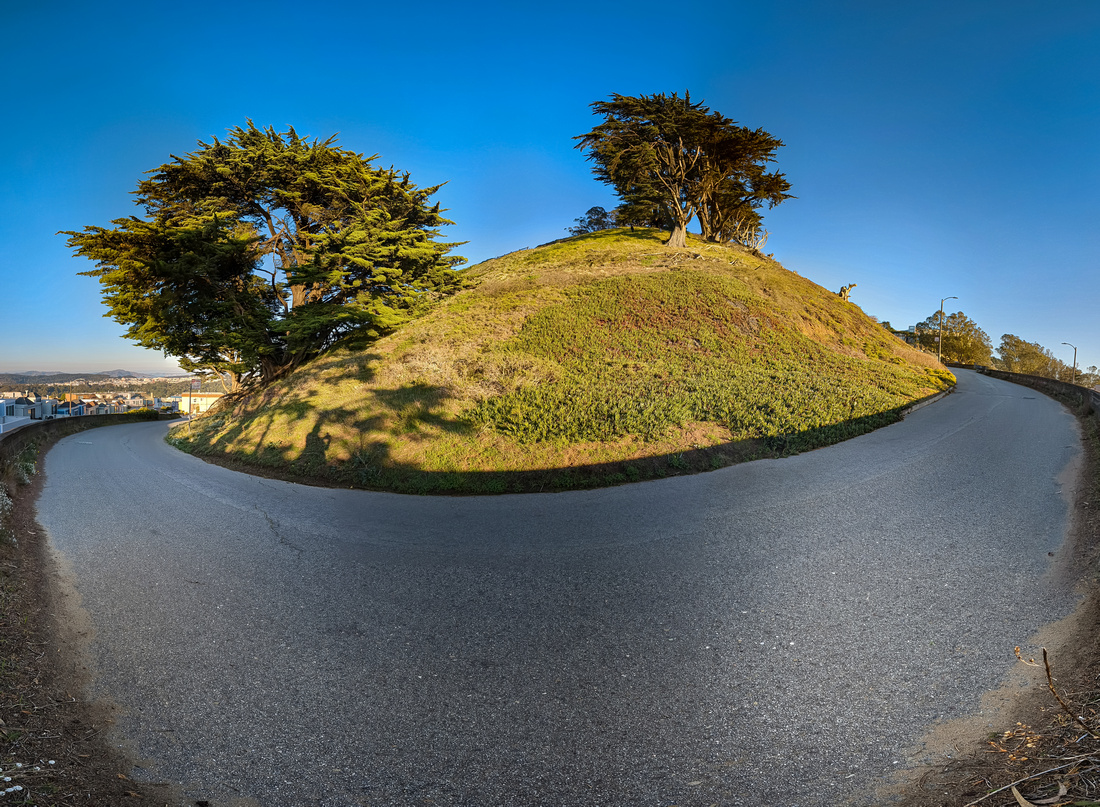 After making it to the top of the hill, I took a bunch of frames for panoramas of one of my favourite views of the city, with this one being the best of the bunch. I still can't get over the fact that views like this exist but a couple of miles from my decidedly urban neighbourhood.

The last time I made the trek to Grandview Park, it was windy and cold. In fact, it's been windy most times I've gone there, but not this time. I didn't feel even the slightest of breezes. The clear sky, pending sunset, and warm temperatures meant others would be enjoying the park.

Deciding not to stick around for the sunset, I made my descent, and saw this fellow enjoying what might have been a cup of coffee as he seemed to be waiting for the sun to sink below the horizon. 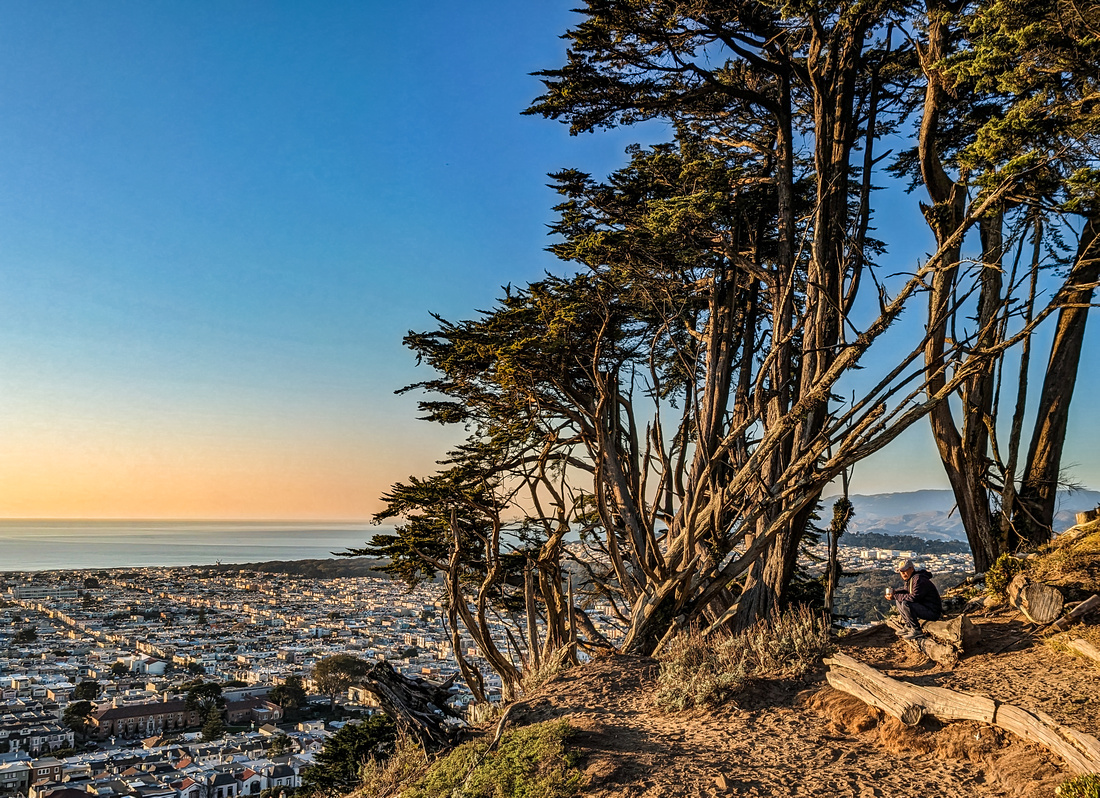 There is a tree which sits in the middle of Moraga Street where it meets 16th Avenue, and I have photographed it often, but never quite to my satisfaction. This time was no different, really, but I couldn't help myself. I probably should take the Nikon with me one of these days as the mobile is just too limited in its capabilities. 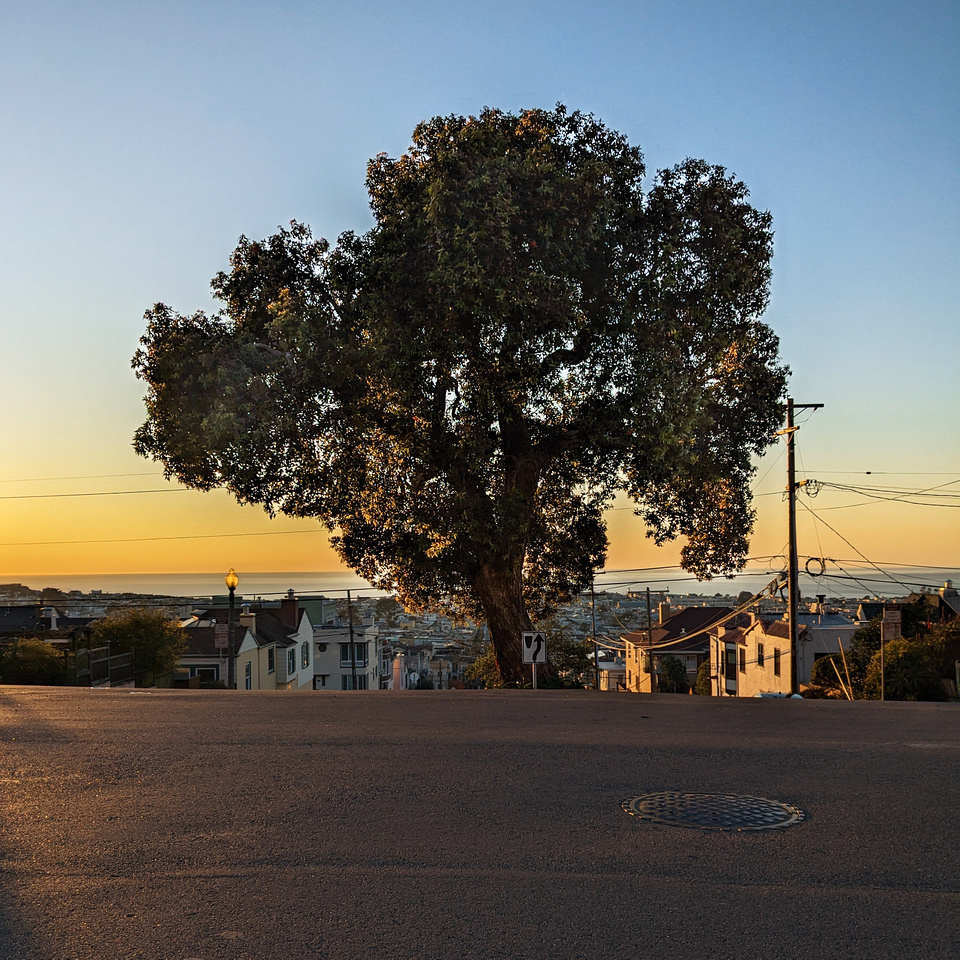 On the way back to Judah Street to catch the N home, I tried another PhotoSphere panorama, inspired by the massive array of wires emanating from one of the utility poles on 18th Avenue. I knew that the wires would create stitching errors within the final image, but I think the splaying of the wires in every which way looks pretty cool. 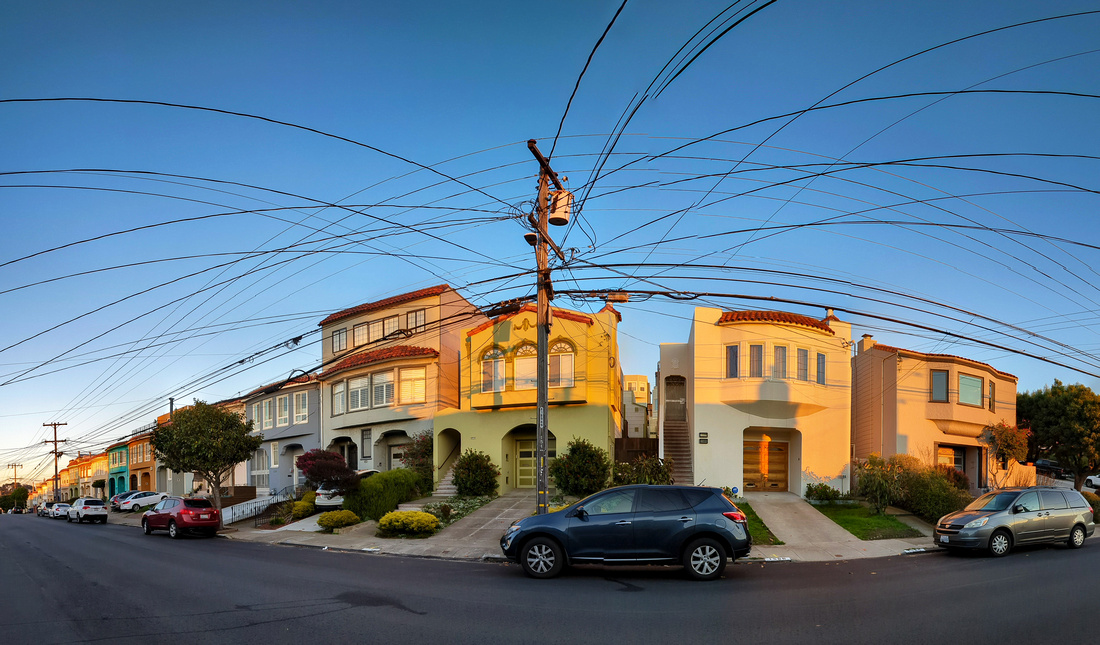 When I moved to San Francisco thirteen years ago, I often felt frustrated by the omnipresence of the overhead wires and how they would—in my mind at the time—ruin perfectly good photographs. But over time I've come to make peace with them and work with them instead of against them.

*A funny thing about the "hidden" steps is that there is a big sign at 16th Avenue and Kirkham Street which reads: Hidden Garden Steps