Many years ago, I spent most of my online social time at Flickr. With the advent of Twitter and Instagram and Facebook and countless other social networking sites, my Flickr time plummeted drastically. I continue to maintain a "Pro" account with Flickr, because I want to maintain not only the thousands and thousands of photographs I've posted there, but the conversations—they often were more than just comments—as some sort of record of the relationships I developed there, many of which became real-life friendships (I've met well over a hundred of my Flickr contacts), most of which migrated to Facebook as a sort of central "meeting" place.

The point I was beginning to stray from was that there were numerous trends and memes that got started at Flickr. Some were very silly... 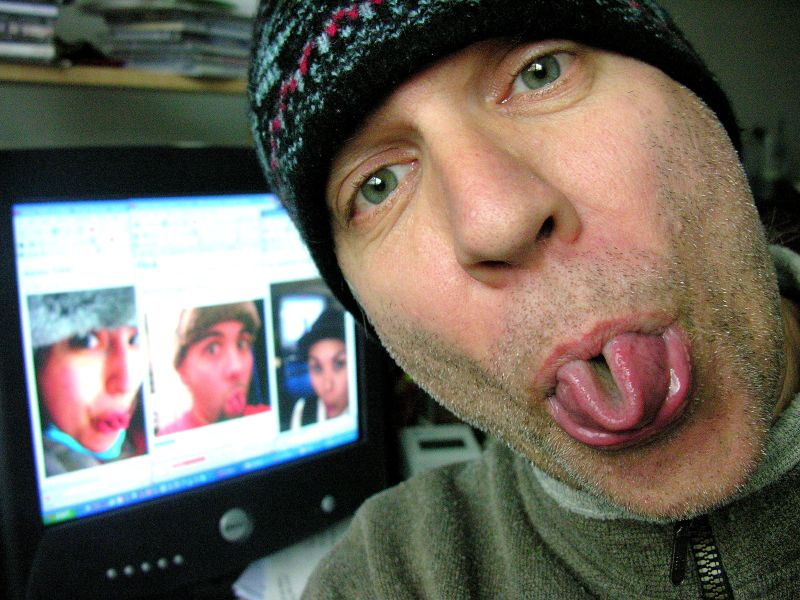 One that was quite cool but was not, I guess, a Flickr thing, consisted of self-portraits taken by people in basically the same place with the same pose— very passport-like in style—looking straight into the camera, for years on end. Watching someone's face and hair (whether on one's head or face) change in the form of a rapid-fire video was quite the sight to behold.

From that, I guess, grew the 365-day projects, some of which were self-portraits. One person, Phillip Chee, has been doing 365/366 Projects since 2007, his first being strictly self-portraits. I tried this the year I turned 50, with a thing I called Daily 50, but missed maybe a week's worth because I wasn't clever enough to really produce interesting self-portraits daily, and because I sort of got sick of it before too long and would just sort of forget to do my photo for the day. One friend of mine has chided me about it as being narcissistic, and while I guess a case could be made for that, I found it as a way to do portraiture, to play with lighting and processing techniques, which were quite new to me at the time. Also... I was my most convenient model. Had there been someone else available and willing to partake in such a project, I would have preferred that route.

All that said, I never got around to completing a project in which I took and posted a photo a day until 2017 on Instagram (if you don't have an account, you'll only be able to scroll so far). In 2020, I did an entire year's worth of photos that I ran through the Prisma app, which "artified" the photographs. I actually liked the results most days, but beyond the final images created, it was a rather grueling mental process looking for scenes that I thought would translate well to "art". I became intent on including (often solitary) people in my photographs during this project, as it added a dynamic that I think made the images more interesting. It also was grueling as I tried out various filters to see which one I liked the most, this while also wanting to not use the same filter day after day because yes, there were some which were consistently better in my mind. This process was time consuming, so I was quite glad when the year and project were over.

For 2021, I decided to do a year of only black-and-white photographs. While there was a similar taxing of my brain as I looked for subjects to photograph that would render well in monochrome, which often meant eschewing really colourful stuff such as murals, the time spent on editing the images once I selected them was less of an investment of my time than had been the Prisma set. If I spent any length of time on the postings, it was with the writing of the descriptions, which I've tried, loosely, to use as a journal of sorts when the Covid-19 lockdown began in March of 2020. I tagged all the photos at Instagram with #ptpower2021inblackandwhite, but have also created a gallery on this site here so that it can be viewed somewhat in its entirety, albeit separated by months. I intend to create similar galleries for 2017 and 2020.

I'm choosing not to be as narrow with my project this year. There likely will be a good mix of black-and-white and colour, maybe with some Prisma conversions thrown in. I won't bend on the square ratio because I'm weird that way, although I guess I dance around that a bit when I post panoramas divided into two or more squares. I'll probably be more apt to post a series of photos from any given day, especially on days I happen to go out for long walks.