Anatomy of a Picture

This is a re-post—with minimal revision—of an essay I wrote for Medium in August of 2021.

In January of 2010, I moved to San Francisco. At the time, I coördinated the music for the now-defunct Great Lakes Folk Festival. Most of my work was done either online or over the phone, so it allowed me to take the leap of moving cross-country from East Lansing, Michigan. I also worked as a photographer, mostly covering events for a few departments/colleges at Michigan State University. So, the move to San Francisco meant giving up a modest amount of client work in the hopes of building a client base in a much bigger, conference-friendly city.

It was a very, very slow go.

To help make ends meet, I was fortunate to get several months worth of relatively well-paid work with the Census Bureau for the 2010 Census. I also ran errands for people. I put IKEA furniture together. I answered Craigslist ads looking for photographers, and posted my own ads looking for work. As best as I can find, I didn’t do any photography work until October of that year, and even that was a freebie portrait session with a woman as a matter of building portfolio and possibly getting my name out there. I did another freebie session with a couple whose wedding I would photograph the following September. My first paid gig was of a "Cupcake Challenge" event in March of 2011. I had responded to a Craigslist ad for a beer festival in October of 2010, and while I didn’t get that job, the fellow who placed the ad had kept my name and email at hand. Foot-in-the-door type stuff, right? Except that it didn’t seem to lead to anything.

On 8 October 2011, I got a Facebook message from one of my long-time Flickr contacts, Liz West (Muffet), who was in town, and she asked me if I were available that night to photographer her brother’s 70th birthday party. Liz’s brother is actor/activist/author/Ken Burns documentary voice, Peter Coyote, something Liz had mentioned in her Flickr stream years earlier, but never had made a big splash about. About ten minutes after I responded to her message that indeed I was available, Peter himself called me to ask if I were available and how much I’d charge. My evening was set.

To be completely honest, when I ended the call with Peter, my mind was on getting everything ready. I probably washed clothes and charged batteries for both the cameras I’d be using, along with the flashes, just as I would do for any other job. I gave not one moment of thought about what to expect that night. Not for a second did I wonder about who might be in attendance. When I arrived at the venue, Bimbo’s 365 in North Beach, I was immediately greeted with the sight of Robin Williams cavorting with people in the vestibule. (Oh!) Once I got situated, I started taking photos of the growing crowd that was mingling, being sure to snap a couple of frames of Robin amongst them because… of course. 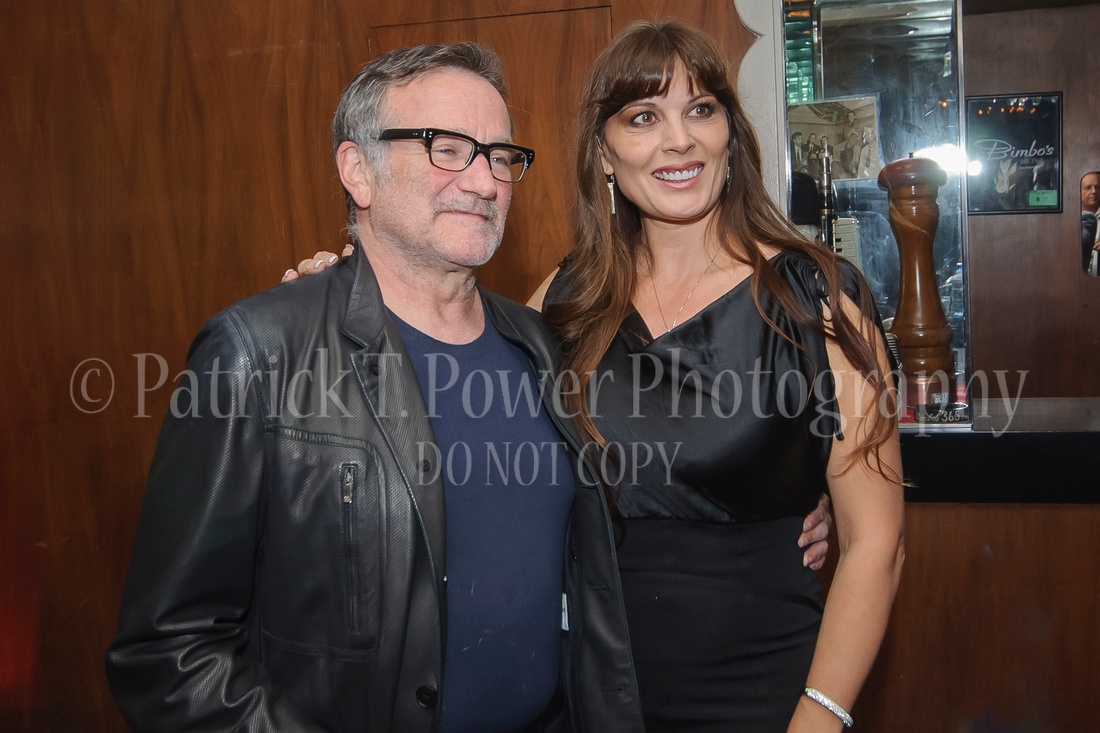 Once the evening’s program commenced, and once everyone filed into Bimbo’s ballroom, I went about doing what I do — documenting what was going on as well as many of those in attendance. I didn’t give much thought as to who they might be. (The only other person I recognized was poet Michael McClure.) A band performed; a gorgeous woman sang; there was dancing. As I meandered about the ballroom, taking photos at this table and that table, at no time did I happen to see (much less look for) Robin Williams.

The time came for the birthday candles to be lit and blown out, and for the next forty minutes or so, various people, including his children, gave tributes to Peter. His wife sang a song for him. The last to give tribute — in the form of a short stand-up routine, of course — was Robin. (I tried to record some video but because I wasn’t familiar with that feature of the camera I was using, failed miserably, getting only nine out-of-focus seconds worth.) I got a few photos of him from a couple angles, but nothing special, really. It was sort of odd that Robin had been one of the first people I’d seen that night, but until he’d gotten on stage, I had not crossed his path once in the duration, regardless the number of times I circled the ballroom.

Once the formalities had ended at around 11:00, I was pretty much off the clock, so I grabbed a little something to eat. I’m unsure exactly how it came to be, but I’m pretty sure I was on my way back from the bathroom when I found myself walking virtually side by side with Robin as we both headed in the direction of my table, which was near the buffet. Seeing Peter ahead of us dishing himself a dessert, I lightly put my hand on Robin’s leather-jacketed shoulder and asked him if he wouldn’t mind me taking a photo of him and Peter. He obliged. In the course of twenty-four seconds, I snapped off three photos — the second one, although slightly un-sharp, did the trick. 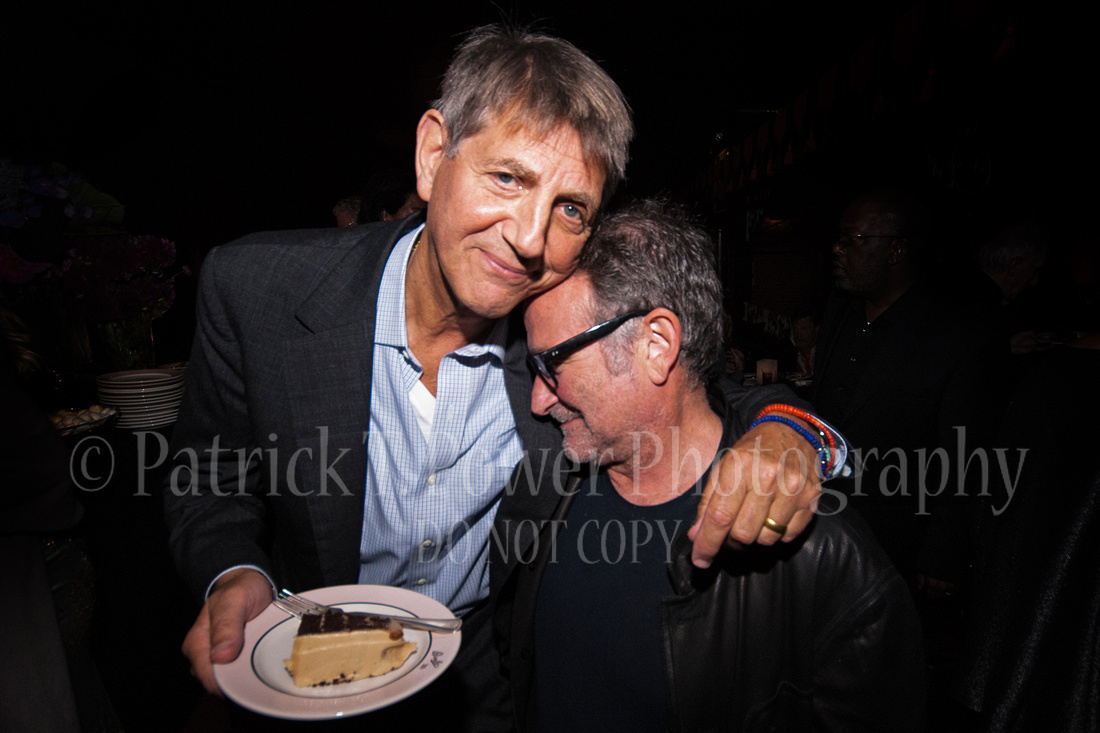 Postscript: I originally wrote this for Medium, after posting the photo in reply to a Zak Williams’ tweet marking the seventh anniversary of his father’s death. I was satisfied that I was done by the time I went to bed, but didn’t get around to publishing it. The next morning, as I was scrolling through the daily Facebook memories notifications, this one appeared… 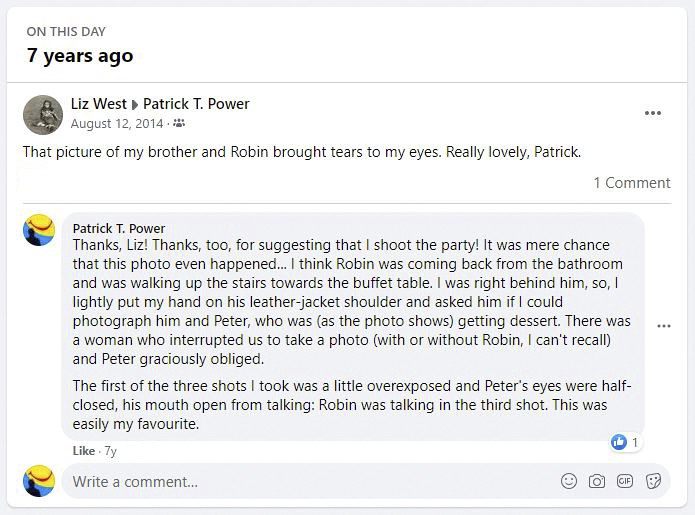